One of the oldest misunderstandings about racism (and bigotry in general) is that it must be explicit to exist.  If you are not walking around in a clan robe or posting swastikas on your facebook profile, you must not be racist.  If you are not explicitly stating that black or brown people are less intelligent, or aggressive, or lazy, etc. by nature, you are not a racist.

The problem with this is that it ignores 99% of actual racism.  If you look at the things that explicit racists say and do, most of it will not be explicitly racist.  However, one can infer the attitudes behind the thinking.  For instance, take a look at this random twitter feed from an explicit racist:

They go by "White Rights Activist":

They routinely retweet posts from non-explicit racists.  But their interest in the dehumanization of minorities is clear.  They seek portrayals of them as unhinged: 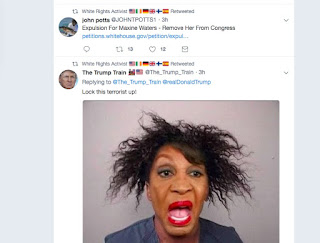 But it's easy to write them off as "one of the baddies" because they are honest and explicit about their racism.

The modern Republican party is filled with people who do just this.  None of them admit to explicit racism, yet say, post and advocate for policies that are identical.

All the while actual policies are being enacted that are extreme violations of human rights.

I could go on, and on, and on.  But there's really no need.  The point is that racism does not need to be explicit to exist.  It can smolder slowly, softly in the background, a quiet voice that whispers the same old song: fear them, distrust them, they are less important than you.  It can always be plausibly denied.  Each instance merely a hint.

But when you take a step back, line up the comments, line up the images, perspectives and emphasis, a pattern emerges that cannot be denied.  It is a cacophonous beast that is well alive and snorting within the hearts of our fellow Americans.